They had a good run, but Marvel’s streak of comic-fueled success had to end eventually, right? Probably this time. That’s the take I was bracing for, girding myself against the unwelcome likelihood that Marvel’s bound to lay an egg sometime. Maybe it’s that the last three Spider-Man movies from Sony haven’t exactly set the world on fire. Maybe it’s that Marvel’s success is unprecedented in a sell-your-soul-to-the-devil kind of way. Luckily for Spidey fans, my fear of Marvel’s fall is premature. Spider-Man: Homecoming delivers the movie fans have always wanted, weaving together heart, humor and action in all the right amounts. Marvel continues to have a Midas touch, I’m getting out of the predicting their failure business.

Homecoming marks Spider-Man’s first stand-alone entry into the Marvel Cinematic Universe (MCU), with Tom Holland starring as the titular teenage superhero. The film also is a chance for Sony’s cooperation with Marvel to stabilize what had been a floundering franchise. Holland appeared in Captain America: Civil War, and his introduction in that film will have to suffice for anyone looking for an origin story. This is the sixth Spider-Man movie in 15 years, we don’t need to see Peter Parker get bit by a spider… again. Eschewing the predictable and familiar, this movie realizes the potential that sequels often hold. We know the characters, their situations, their problems, and we can dive into a story without the heavy lifting of initial character development. The choice to forego telling an origin story involves some risk, and takes a studio that knows its audience and characters well.

More than anything, it’s the studios’ understanding of the characters at the heart of this movie’s success. Holland’s Peter Parker is note perfect, whereas Andrew Garfield, who starred in the two previous iterations, was miscast in the role. I respect and admire Garfield’s work, but he’s just a bit too conventionally handsome to play a bookish, social outsider as easily as Holland does. Much of the fuel that drives teenage angst is yearning for independence, for teens with and without super powers. This fact of life makes Peter Parker relatable in a way that taps into the experiences of our youth, but the character can miss the mark if the recipe isn’t just right. Not that this is a perfect movie. Michael Keaton returns to superhero movies and he’s great, but his character’s origin forces a mighty leap of faith for audiences. 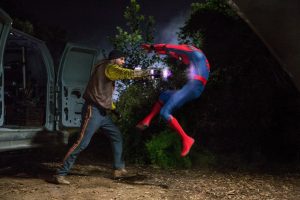 This movie has an unmistakably teenage tone, much more than any previous entry into the MCU. This approach, while certainly a risk, demonstrates the impressive flexibility Marvel employs in weaving together different franchises into a cohesive narrative. Homecoming exists in a teenage world, but deftly avoids pandering to teens or to adults who would rather scoff at and see teens lampooned. The feel is authentic, such that I can call it that being significantly removed from my teenage years. Whether it’s a true-to-life representation of teenage life is beside the point. The balance here serves the purposes of the story, imbuing emotional depth and avoiding the distraction of a clunky approach.

As long as Marvel keeps making movies that understand their characters and audiences as well as they do, I’m not betting against them. This movie wasn’t even exclusively a Marvel affair. The long-awaited studio collaboration that spawned this movie shows how much Kevin Feige, head of Marvel Studios, gets it. With the wild success of Wonder Woman, it appears D.C. may be closer to figuring out the recipe for their own universe of characters, while other studios struggle, 2015’s Fantastic Four being a prime example. Since 2008, Marvel has redefined comic book movies and any studios wanting to play in that space better do their homework. Marvel set the bar. Your move, studios.